We can’t speak to the merits of “Homeland”, but we thought Season 5 of “Mad Men” was superb and worthy of recognition. Fans everywhere are blaming the “Mad Men” shutout on the much-maligned Megan. We actually think actress Jessica Paré did a nice job with Megan (ducks pitchfork) and instead attribute the loss to Emmy voter fatigue and the deep bench of quality dramas on television right now. Hollywood Reporter TV critic Tim Goodman tweeted the most astute summary: “From cruelty comes something to be proud of: Great shows being “snubbed” because other great shows won. TV is killing it these days.” Word.

Speaking of “Mad Men”, we have a total mom crush on actress Kiernan Shipka (aka Miss Sally Draper). Dressing appropriately as a tween is challenging and Ms. Shipka always nails it, looking age appropriate but in an utterly chic manner. Her lovely Zac Posen frock last night was no exception, from the gorgeous sea glass color to the clever length (suiting both her age and the nature of the occasion perfectly). One look at this child and you know there’s no way she’s hitting the after-hours parties at Chateau Marmont. Her parents should be patting themselves on the back repeatedly.

Can we give a collective sigh of relief that the disappointing second season of “Downton Abbey” was not unjustly rewarded? We’d hate for Emmy voters to be grumpy about one of our favorite shows going into what *should* be a stellar Season 3. (And if, like us, you’re suffering from “Downton” withdrawals, check out the Dowager Countess’s mock Twitter feed and watch Seasons 1 and 2 for *free* on Amazon Prime Instant Video.) 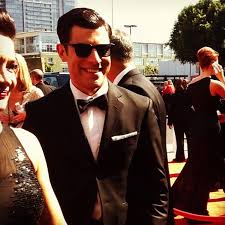 Max Greenfield was ROBBED so hard he should file a police report. (Even perennial bootlicker People Magazine agrees with us.) His Schmidt is the real star of “New Girl”, a former fat kid and now aspiring douchebag who *should* be loathsome but (as brilliantly played by Greenfield) wins you over with his earnest charm. Greenfield is also, by all accounts, an incredibly nice guy in real life (we dig his Twitter feed) who hasn’t been kicked out of a Dodgers’ game recently, ahem.

Claire Danes is skinny pregnant and looks so lovely that even we can’t muster enough vitriol to mock her. Suck it, Natalie Portman.

Dear Amy Poehler & Heidi Klum: What’s with the plunging v-neck gowns? Just because you’re newly-single doesn’t mean you have to dress according to the cougar handbook. (Also, you’ve both had some kids and the, uh, effects on your bustlines are now plain to everyone, everywhere, forever.)

The silhouette is a little unusual (and we have no idea who Emilia Clark is), but this embellished ivory-and-purple Chanel gown was our absolute favorite of the evening. How fun would it be to twirl in this dress and toss the outer skirt over the back of a chivari dining chair like tuxedo tails?